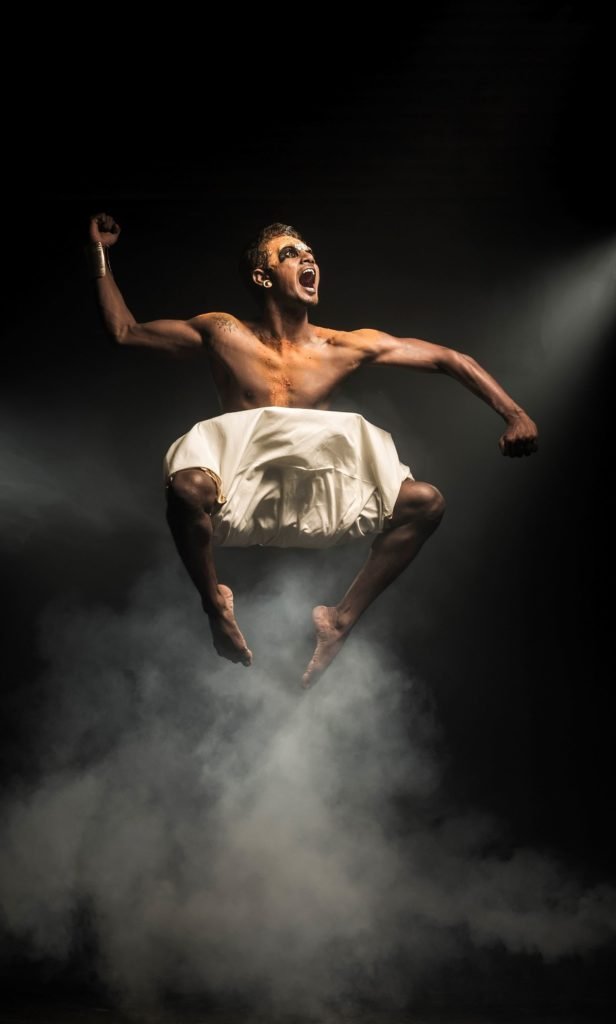 Vishwakiran Nambi is a Performer, Choreographer, Dance film maker and Dance academic.
He was the principal dancer, Head of training and one of the Principal choreographers of ‘Nritatutya Dance company’, for over 10 years and is now the Founder and Director of Vishwakiran Nambi Dance Company.

His vision is to explore the possibilities in Indian dance frame particularly with the vast folk landscape. His creations are mostly experiences of regional authenticities and existential peculiarities.

His training is diverse ranging from Indian classical forms to Indian folk and martial dance forms. Though his foundation is in contemporary dance and Bharatanatyam, he constantly trains and explores the folk dimensions of South Indian dance and trains extensively in martial forms.

He has been a solo performer for over 5 years now and has choreographed and presented his solo ‘Stone Unturned’ at the prestigious ADA Rangamandira in Bangalore as part of ADHYAYA 2017. He has, from then, choreographed multiple short pieces for Nritarutya and has gone on to create his own repertoire after he moved out of the Company. His vision is to explore the possibilities in Indian dance framework particularly with the vast folk landscape. His creations are mostly experiences of regional authenticities and existential peculiarities.

He has explored the possibilities in taking contemporary dance to Indian cinema through several successful ventures as a choreographer in South Indian regional feature films and is also currently directing a folk based web series for a leading online streaming channel. He has successfully completed his directorial debut as a dance film-maker with his ambitious short dance film ‘The Kitchen’. He is now extensively exploring the possibilities of designing dance for lens and establishing a center for studying dance film-making in India.

Dance education is one of the things that Vishwa feels very passionately about and has resulted in his designing and executing dance education modules for Universities. He has envisioned and is currently executing the dance education syllabus for the B.Voc programme in Jyoti Nivas College, Bangalore. He is also conducting short-term dance education courses in other prestigious colleges in Bangalore.

He envisages a future in which dance education plays a pivotal role in our Universities.

At LOKA, he spearheads the entire gamut of educational programmes ranging from community classes to short courses to aerial silk education. He is also a pioneer in introducing aerial silk in Karnataka.

The journey so far…

Bachelor of Commerce from St. Joseph’s College of Commerce, Bangalore

Conceptualization and choreography for the “Mooga Manasulu” music track from the movie “Mahanati”
Choreography for the trilingual music video “Neeye”
Created and performed “Stone Unturned” at “Adhyaya”, a piece involving the intersection of technology with dance with the use of projection mapping
Conceptualized and choreographed an ad-film for the bran “Twin Birds”
Concept and choreography of the song “Kangalin” from the movie “July Kaatril”
Choreography for the song “Khali Khali” from the movie “Kavalu Daari”
Choreography for the band Lagori for their cover of the song “Hamsanava” from the movie “Bahubali”
Involved as the Movement Director of a play called “Limbo”, directed by Manish Gandhi
Choreographed for a play directed by Dr B Jayashree, titled “Baalura Gudikara”
Featured in Young International Choreographers Festival, organized by Attakkalari Biennial, 2009
Toured with the Company with the critically acclaimed solo piece “Trishankhu”
Performed at the Make In India opening ceremony at Hannover Messe, Germany
Lead dancer for the Pro Kabbadi 2017 opening ceremony
Performed at the Isha Foundation on the occasion of Mahasivaratri, 2017
Performed at the Golden Jubilee Celebrations for the Queen of London, Elizabeth-II, at Windsor Castle
70th birthday of Sri Amitabh Bachchan for Sri Hari Vansh Rai Bachchan’s poem “Madhushala” at Filmcity
Part of the contemporary musical “Madhur Milan” as a part of Smt. Kokilaben Ambani’s 80th birthday celebrations at her residence “Sea Wind”
One of the 2 dancers from India to be part of the DanceIntense, Toronto 2009, Choreography lab organized by Sampad Asian Arts, UK
Performed at the ‘Celtic Connections’ Festival, Glasgow, Scotland in collaboration with the RDP Project
Performances at Indian and international festivals such as Sama, Newcastle, and World Performing Arts Festival, Pakistan
Lead dancer in Nritarutya’s mega productions, Prayog – 3 and 4
Performed the Indian Musical – Shakuntala, commissioned by the Vedanta Group
Festivals

​Here are links for some of the works: